On a typical ski season Saturday, Sarah Baker and Chris Rose wake up one mile from Burke Mountain. They step outside their cabin for a morning snowshoe with their dogs. Then, they head to the slopes for a day of skiing or fat biking, depending on conditions. By 3:30, they’re warming up with drinks—a hot toddy for Baker, a Vermont craft brew for Rose—in front of the fireplace in the The Bear Den, Burke’s historic bar.

Try not to get too jealous of their routine. Baker and Rose bought their East Burke cabin nine years ago. Except for occasional work or family conflicts, they arrive at the cabin faithfully every Friday night, staying until Sunday. “We knew we wanted to have a ski place,” Rose says, “and when we visited Burke, it felt like real Vermont to us: Old-school outdoor paradise.”

The good news for everyone else is that you don’t need to buy a ski cabin to experience that paradise. In 2016, the ski resort built the Burke Hotel. And if you book yourself a weekend there, you can enjoy the mountain’s best of both worlds: all the amenities of a brand-new luxurious (and dog-friendly!) hotel plus the experience of kicking back at a classic ski bar. Oh, and don’t be surprised if Kristen, the long-time bartender, remembers your first name the next time you drop in.

Naturally, if you’re planning a weekend trip to Burke, your sights are set on skiing the intimate trails, Instagramming the insane vistas, and having an incredible Vermont ski experience, testing yourself with how many runs you can squeeze into one day if you make first tracks. (Rose says 20 runs is very doable thanks to always-short lift lines). Because Burke Mountain Hotel is built around skiing, all of this is made easy: the hotel is truly slope-side, so you can ski-out.

You’ll be on the mountain as fast as you can walk down the stairs from your room. And every room offers a beautiful view to wake up to: Burke Mountain to the east and the Willoughby Gap to the west—one of Vermont’s most iconic views. Still, the best views come with the skiing. Ask anyone on the mountain for their trail recommendations, and you’ll probably hear about East Bowl. Like Rose and Baker, Barb Mader owns a condo at the foot of Burke, along with her husband, Don. They’ve been there for 14 years and skied Burke regularly since. After listing about 10 great runs, Barb boils it down to one: “Our favorite is East Bowl,” she says. “It goes way out around and you feel like you’re the only person on it. You can look out across The Presidential Range and it’s like you’ve gone to heaven. It really truly is spectacular.”

And once you experience that slice of heaven, just ski back to your hotel, where you can whip up meals in your room’s kitchen (equipped with a stove and full-sized fridge) or head into the quaint town of East Burke for a bite. If you make it up for a Thursday night, be sure and join in with Burkies—mountain regulars—for Trivia Night and burgers at the hotel’s View Pub Bar.

But it wouldn’t be a visit to Burke if you didn’t taste its history — after all, people have been skiing there since 1955 and adventurers have been picnicking on and hiking its trails as far back as 1860.

Every morning at 10 a.m., Kristen Classen walks through the doors of The Bear Den where she’s been bartender for 15 years. And every morning, a trail of skiers track in clumps of snow after her. The bar won’t open for another hour, but Classen exchanges morning greetings with her regulars, who like to keep her company while she sets up. A crowd of regulars enjoys themselves at The Bear Den.

The 50-year old Bear Den is just a stone’s throw from Burke Hotel, inside The Mid Burke Lodge. It’s beloved among Burkies, like Don Mader.

“Every Saturday—and most other days—he’ll go out and take a couple runs just to see how everybody is doing—the lift mechanics, the attendants,” Barb says of her husband. “Then he’ll stop in to the Bear Den just to say hello to the girls.”

Classen said that Don Mader doesn’t even drink, he just loves the atmosphere. Later in the day, when Barb skis in, a Magic Hat Single Chair will be waiting on the counter for her, with a seltzer beside it for Don. It’s that kind of bar.

With white Christmas lights glowing year-round around the windows, a real wood burning fireplace that’s always roaring (all the rest at Burke have been converted to gas), and soup and chili served daily, The Bear Den is the definition of welcoming, despite its ancient frame. Everyone feels at home there and Classen knows most everyone by name.

“There’s some people that come back on the same holiday weekend every year and they think it’s magic I remember them,” she says with a laugh. “As far as I’m concerned, The Bear Den is the heart and soul of the mountain. It’s a great leveling field. More often than not you’ll see somebody skiing in their Carhartts right next to somebody in their Helly Hansen gear. It’s where people go to learn where the good stashes are. And everybody from out of town feels local.” Cheers to another great day on Burke Mountain.

Barb Mader had her own perspective on the appeal of The Bear Den. “Don and I are both in our 70s and we hang out with the kids in their 20s there,” she said.

Baker and Rose are also locals during ski season, and know Classen—and the Maders—well. “We kind of joke, The Bear Den is our community center,” Baker says with a laugh.

“We’ve been fortunate to ski a lot of places in the northeast and out west, and to us that nostalgic ski culture is hard to beat,” Rose adds. “The Bear Den just feels old school. The floors are warped, the ceiling leaks, the fire’s hot, the band is great.”

On Saturdays, when the bar has live music from 3-6 p.m. from local Vermont bands, it’s typical for the bar line to be 10 deep, Classen says, though luckily, her co-bartender, Germaine Murphy, will be working too. Not in the mood for what’s on tap? Try a house cocktail, all named after the surrounding slopes.

With 10 rotating taps and staples like Guiness, Switchback and Fiddlehead, the bar also has classic house drinks named after Burke trails like ‘The Flamin’ Eddy,’ ‘Why Not’ and ‘Hibernator.’ One of the most popular drinks is a White Russian, Classen says. “The ski patrollers like to call them ‘Big Lebowskis,’ because of the movie, so people in the know order those,” she laughs. Classen and Murphy also make hot chocolate for lots of kids who come in with their parents, using nothing but Vermont Cabot whipped cream to top it off.

But even if you’re not entertained by the drinks or music, just peruse the walls, which are covered in retired ski gear and old trail signs.

“Everything has a story, of course,” Classen says. That pair of Telemark skis? “We actually had a guy try to ruin his girlfriend’s ski career by putting a knife in her thigh! This one guy clocked him with those skis—so those are hanging up.” That pair of tiny little crutches? “They’re from a family that comes all the time. The daughter had a broken leg one year and spent all her time in the bar with me drinking hot chocolate. Her dad nailed them on the wall the next season.” And those marks on that beam? “They’re from a boy whose mom was pregnant my very first year here. He’s 14 now. We mark his height in ski boots every year on that beam at the beginning and end of the season.”

Those marks, and that beam, inside the legendary Bear Den should be around for a long, long time. 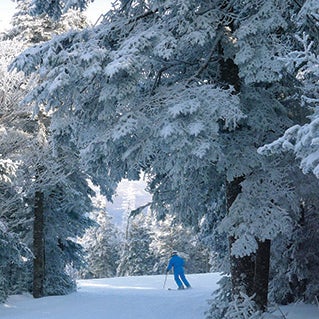