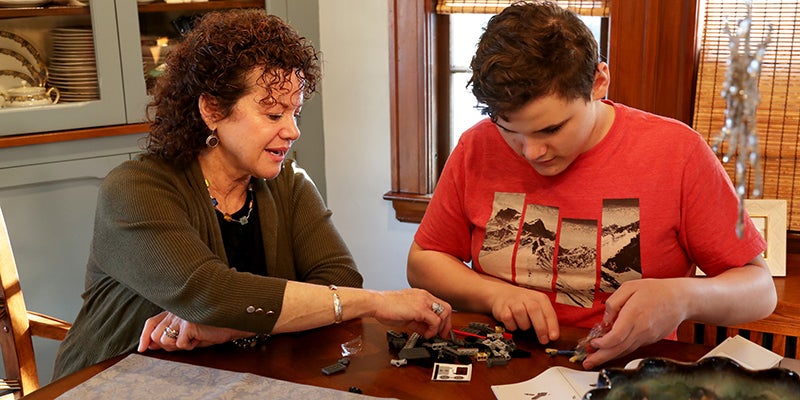 Owen seems a lot like any shaggy-haired teenager these days. He loves a good adventure, the thrill of a steep roller coaster, and all of the most sarcastic superheroes. He has good days and not-so-good days. He is happy, healthy, and occasionally moody like any typical 14-year-old, and he’s on his way to a bright future.

The path he’s on, however, wasn’t always so clear. Owen today is far different from his younger self, who struggled for years with anger, anxiety, and depression. He only blossomed into the young man he is today thanks to a support system that refused to accept any outcome for him other than his current trajectory.

In Massachusetts, as around the country, an overtaxed system for treating individuals with mental health issues has become a full-blown crisis. Treatment facilities for children are scarce; beds even more so. Even if a bed is available, fully integrated mental health programs that take into account family, school, doctors, and social factors are seldom found, forcing parents to piece together a care program themselves. Owen, 14, has transformed in the past few years, becoming the confident young man he is today.

That’s what Owen’s mom, Kate, learned while looking for help for her adopted son.

Ten years and 75 clinicians later, her search ended inside the bright hallways of Franciscan Children’s in Brighton. It was there Owen suddenly found counselors and doctors who taught him ways to cope; staff members who encouraged his interests in Legos, movies, and sculpture; and friends to play board games with. It was there where he learned to laugh again—and rediscovered himself.

A family in crisis Young Owen was adopted after a short time in foster care.

Born to a mother who abused drugs, Owen was underweight and fussy when he came into the world on a crisp fall day in 2003. At three weeks old, he was taken from his mother and placed with his maternal grandmother. When that didn’t work out, he was turned over to a foster family who made it clear they had no plans for adoption. At just 10 weeks old, Owen was pretty much alone in the world when Kate heard about this baby boy who needed a home.

Adopting the 10-week-old little boy was a dream come true for Kate and her husband, Robert. The couple always hoped to add another child to their family, a little brother to 5-year-old Olivia.

Owen developed normally at first, but by the time he was three it became clear something was off. First there were language delays, then more challenges emerged.

“There were extreme outbursts beyond what most 2- and 3-year-olds experience,” Kate recalled. “As time went on, those loud and angry outbursts just didn’t go away.”

An early intervention program helped Owen enter preschool; but by the time he enrolled in kindergarten, he had turned aggressive and angry and he needed a program for children with emotional issues. A more restrictive program didn’t help much, and soon Kate and Robert were hearing heartbreaking stories of other parents who were telling their own children to stay away from “that bad boy.” Owen struggled with academics, and he grew lonely with few friends to play with.

“Owen was having a terrible time at home, in the community, in the neighborhood, making friends,” said Kate. “We tried to be good parents. We tried to do the right thing.”

It was a painful period for the entire family. “We lived a hellish experience for years,” Kate remembered. “We went from crisis to crisis.”

Doctors would eventually diagnose each family member with elements of post-traumatic stress disorder, a sign of just how painful their time had been navigating the mental health system to help Owen. All of those years filled with ambulance trips, emergency room visits, doctors, therapists, treatments, and diagnoses had taken their toll.

By the time Owen was 8, the family was at a breaking point. Owen was threatening his own life and the lives of others, Kate said. It wasn’t until Owen and his family found Franciscan Children’s that they began to believe change was possible.

After learning about the specialized work that takes place at Franciscan Children’s, a premier provider of pediatric mental health care for children in psychiatric crisis, Kate reached out to the McLean-Franciscan Child and Adolescent Inpatient Mental Health Program. Desperate for a new perspective, she showed a video of one of Owen’s violent outbursts to one of the program psychiatrists. Recognizing the symptoms and behavior patterns, the psychiatrist recommended hospitalization. It was a difficult step, but it was also the first time Kate felt Owen got the diagnosis and treatment he needed to move forward.

“Owen’s condition wasn’t something that doctors understood or recognized until we got to Franciscan,” said a grateful Kate.

Owen has what’s called Disruptive Mood Dysregulation Disorder (DMDD), and it is compounded by learning disabilities and sensory dysfunction. He is also on the autism spectrum, doctors told the family.

Even Owen recognized how much he needed help.

“I had a lot of anger and anxiety,” he says. “It was hard to control. Feelings of being friendless and depressed didn’t help either.”

That all changed when he was admitted to Franciscan Children’s.

Everything under one roof

It was a team approach to integrative treatment that made the difference in Owen’s life and the lives of his family members, Kate explained. As part of that integrated approach, Franciscan used highly skilled psychologists, psychiatrists, counselors, social workers, and medical personnel to help Owen gain the power to control his own impulses when frustrations seemed insurmountable.

“We really had a chance to take the parts of him that felt like a failure and really made him feel he could belong and connect,” said Dr. Ralph Buonopane, program director of the McLean-Franciscan Child and Adolescent Inpatient Mental Health Program.

A key to Owen’s recovery, Buonopane said, was getting both Owen and his family the therapy and support they needed to navigate crisis situations. For Owen, that meant focusing on his strengths and skills as a way to build the confidence and coping mechanisms he sorely lacked to better manage his often intense emotions.

Looking back, looking ahead

Recently Owen sat down with a local comic book artist named Jason Wiser. Watching him play intensely with Legos while laughing and chatting with a total stranger was like watching any other kid. He smirked and smiled as he focused on the building blocks in front of him, displaying no hint of what he’s endured.

For Owen’s family, the changes they’ve seen in him are nothing short of miraculous.

“I felt like I was finally with people who could see Owen as more than just a troubled child,” said Kate. “[His care team] could see he was a really nice kid.” Owen has made such progress, in fact, that Buonopane smiles proudly when asked how his teenage patient is doing today. “He’s an articulate young man,” Buonopane said. “It’s a pleasure to see him now. He’s almost an ambassador for our program.”

Owen is the first one to acknowledge how far he’s come.

“I don’t act the same as I did those years ago,” he says while showing off his skills as a master Lego builder and virtual reality player at his home in the North Shore. “I’m more relaxed. More chill.”

Six years and multiple hospitalizations later, Owen still experiences setbacks, but is now more capable of recognizing them, and adapting. They call him a superhero, and it’s easy to see why. Tall and handsome with a shy smile and a quick sense of humor, he’s a young man the rebellious characters he admires would certainly appreciate. Owen’s transformation is one of heroic proportions.

“I feel good about my progress,” Owen says.

He still struggles with some situations, but he’s also discovered new ways to deal with life’s challenges, thanks to Franciscan.

“Franciscan Children’s is one special, unique, unusual place that provides strong nursing care, social services, mental health care, and understanding for not only the child but the family too—even at home and in the community. It is especially outstanding in this discombobulated mental health system,” Kate said. “So many of Owen’s needs were met once we got [there].”

That’s because the staff there saw something in Owen that others did not.

“They saw his spirit, his potential, and helped connect us with tools and resources that could help,” she added. “We had hope for the first time.” To learn more about children like Owen and the services that Franciscan Children’s provides, please visit franciscanchildrens.org. 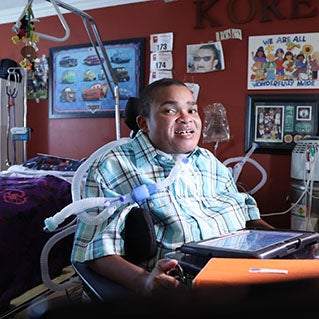 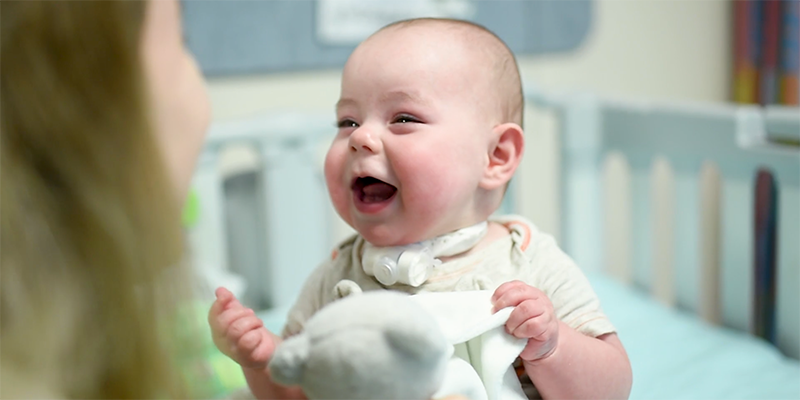 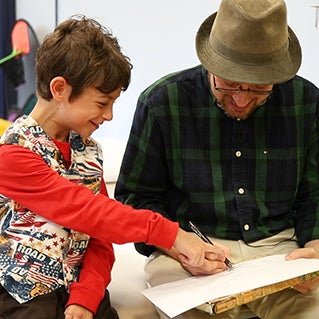 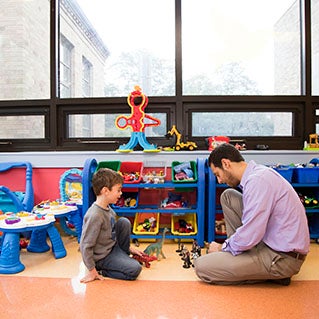