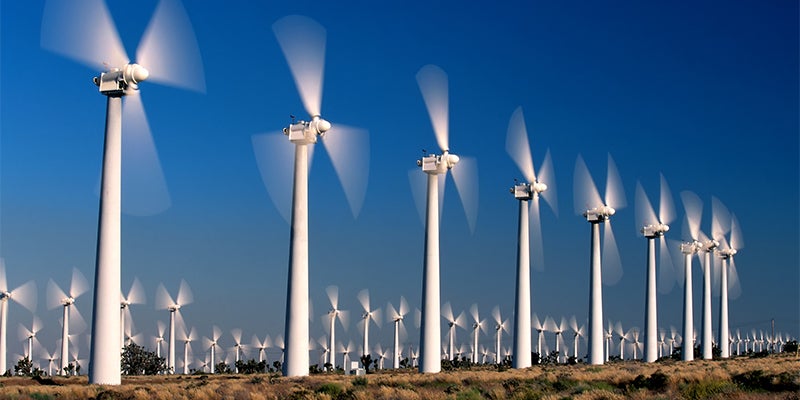 Here’s a green energy question to consider: In New England, what percentage of the region’s power these days comes from alternative sources? That includes wind, solar, hydropower, and nuclear.

And another 40 percent of the region’s power comes from natural gas. Although it’s cleaner than coal and oil, it’s still a fossil fuel and still emits greenhouse gases into the atmosphere. While it’s hardly the final answer to zero-emissions, some see natural gas as a “bridge” fuel that will narrow the emissions gap until zero-carbon-producing renewable energy sources can scale up and take over.

It’s happening faster than most realize. Already, the region uses hardly any coal to generate electricity. In fact, according to the most recent data available from the U.S. Energy Information Administration, Vermont and Rhode Island use no coal at all. And as the energy landscape shifts, competition heats up to produce alternative energy and renewable energy sources faster, smarter, cleaner.

“This convergence is helping to build out solar, offshore wind, and new electricity business models—all of which are spurring job growth in our region’s clean energy companies.”

In fact, New England could not be better positioned in the climate change debate.

The United States and China—the planet’s two biggest economies—recently ratified the Paris Agreement, the global emissions-cutting accord reached last year. Wind turbines and solar panels are as commonplace today as electric street lights were in the early 20th century. Public policy at the federal, state, and local levels is starting to address the pressing need to move away from greenhouse gas-emitting sources of energy and toward “green technology” alternatives.

None other than Pope Francis has issued a plea for countries around the world to address climate change. At least in America’s Northeast, his plea echoed progress that had already begun.

Many of the green-tech solutions to the climate challenge have already taken root here in New England—from offshore wind proposals along the region’s hundreds of miles of coastline to mammoth solar farms in our acres of open space to the research laboratories of some of our most prestigious centers of higher learning. But the big question still looms: Is the global community doing enough to combat climate change? Or are all these collective efforts to cut greenhouse gases simply the equivalent of rearranging the deck chairs on the Titanic?

Bill McKibben, the Schumann Distinguish Scholar at Middlebury College and a well-known, outspoken voice in the global warming debate, isn’t one to mince words.

“We’ve waited far too long to stop global warming,” McKibben said in a recent interview. “That’s no longer on the list of options. The question at this point is, can we limit the damage to a place where civilizations as we know them can survive?”

While in many respects Massachusetts is a leader in the clean-tech movement, it’s got plenty of room to grow. The Commonwealth’s energy portfolio is still highly dependent on natural gas, which the Energy Information Administration estimated at 64 percent of the state’s net electricity generation in 2015. Renewable energy, meanwhile, accounted for only about 10 percent last year, with about two-thirds of that electrical generation coming from solar, wind, and biomass, and one-third from hydropower.

Where the Commonwealth does excel, however, is as a center of technological research and a mecca for venture capital.

Not surprisingly, it was MIT that got the ball rolling as far back as 2001 by establishing the Laboratory for Energy and the Environment, a research think-tank focused solely on helping to develop technologies and solutions that will deliver clean, affordable, and plentiful sources of energy.

As a financial center, Boston and its cadre of leading venture capital, private equity, and legal firms have helped many fledgling companies bring their clean technology innovations to market. State agencies such as the Massachusetts Clean Energy Center and its IncubateMass program are also making grants to help accelerate the development of clean-tech startups.

In early August, Governor Baker signed an omnibus energy law that, among other things, spurs the development of two industries in the Commonwealth: energy storage technology, which would allow consumers to capture and use electricity as needed; and wind power, including the procurement of 1,600 megawatts of offshore wind.

Rhode Island is not far behind

It makes sense that with the nickname the Ocean State, Rhode Island is looking for ways to use its geography to capitalize on offshore wind as a way to boost its clean-energy supply. Sure enough, the nation’s first offshore wind facility is now under construction three miles off Block Island. The project’s five six-megawatt turbines are scheduled to begin operation in late 2016 and are expected to supply most of Block Island’s power, diversify the state’s natural gas-dependent power supply, and reduce air pollution across southern New England for the foreseeable future. And since Rhode Island already uses no coal for power generation, it’s the second-lowest emitter of carbon dioxide across all sectors and all states, according to the EIA.

It’s the Green Mountain State, so it must have a green energy strategy, right? Vermont is often seen as a perennial early adopter of cutting-edge trends. Last year, the state passed Act 56, a first-of-its-kind law that imposes a renewable energy standard requiring that a certain amount of electrical power must be generated by renewable sources. The goal is to establish a ratio of 75 percent in renewable electricity by 2032.

With the decommissioning of the Vermont Yankee nuclear plant in 2014, the state produces less than 40 percent of its own electricity and depends on power from the New England grid and from Canada, according to the EIA. In 2015, nearly all of Vermont’s in-state net electricity generation came from renewable sources, including hydroelectric, biomass, wind, and solar resources.

“We buy about a third of our power from Hydro Quebec, which makes it almost a baseload resource.” says Kim Hayden, a renewable energy attorney at the firm of Paul Frank + Collins in Burlington.  “We’ve also installed a significant amount of solar in Vermont. Our state has a lot of open land, so I think we could do more in that regard.”

From a renewable energy perspective, Maine enjoys three natural advantages: approximately 90 percent of the state is forested; its coastline is the nation’s fourth longest, according to the National Oceanographic and Atmospheric Administration; and it shares a 600-mile border with Canada, which is the world’s second largest producer of hydroelectric power.

That’s a strong position to start. These geographic advantages are largely responsible for the state’s high proportion of renewable energy generation. In 2015, according to the EIA, a full two-thirds of Maine’s net electricity generation came from renewable resources, with 30 percent from hydroelectric, 26 percent from biomass (mainly wood products), and 10 percent from wind.

A University of Maine offshore wind farm project that proposes to use floating wind turbines is currently in line to receive federal funding for a demonstration project off of the mid-coast region of Maine. The project is seen as a critical step toward creating large-scale wind farms in the Gulf of Maine that could bring a vast, new clean-energy resource to the Northeast.

New Hampshire ranks third in the nation, after two of its neighbors, Maine and Vermont, in the proportion of its net electric generation that comes from biomass, mainly wood and wood byproducts. Yet almost half of the state’s 2015 net electricity generation came from the large Seabrook nuclear reactor, according to the EIA, while natural gas accounted for another 30 percent.

In 2011, Connecticut established the country’s first “green bank,” a quasi-public entity that leverages public and private funds to accelerate the growth of renewable energy in the Nutmeg State. The Connecticut Green Bank offers affordable financing to homeowners, businesses, and municipalities to transition their legacy energy systems toward green alternatives.