How men are finding mental health support with digital tools

Joe R. was feeling depressed and desperate one late winter evening. So he began surfing the web looking for help and stumbled across a website called Man Therapy. The Colorado-based site partners with mental health advocacy groups across the country—including in Massachusetts, Rhode Island, and Maine, and is just one example of the plethora of digital tools transforming behavioral healthcare for men. Virtual therapy sessions, online support groups, mindfulness and symptom-monitoring apps, and text-based counseling are expanding access to mental health care. They are also destigmatizing psychiatric illness, enabling people to seek help anonymously, and empowering men to take an active role in their recovery. Many online tools for seeking mental health treatment are often gender-neutral. But they can be particularly helpful for men, who may be reluctant to seek out behavioral health care for fear of appearing weak and vulnerable. The roots of these perceived gender norms were planted millions of years ago, according to one psychologist. “Men had to go into the wilderness and hunt and do other things in order for their families and tribes to survive,” explains Leslie Weiser, a Wellesley-based therapist and instructor at Harvard Medical School. “They had to kill things and not get killed and that meant blunting their feelings in order to get the job done — what some researchers have called ‘repressive coping.’” Weiser is quick to add that he has treated plenty of men who defy this stereotype, but says that testosterone, which regulates mood and drive, can sometimes lead men to be “less sensitive and a lot more shut down.”

Paired with the stigma around seeking mental health treatment for men, this tendency to keep feelings to themselves can mean serious issues like depression go untreated. By some metrics, males are far more vulnerable to mental health struggles than females. For example, in the U.S., men die by suicide at rates between three and four times greater than women; middle-aged white men are the most likely to die by their own hand. Black men also face racial and cultural obstacles to care, and are nearly half as likely to receive treatment as white men. Worldwide, alcohol dependence is more than twice as common in men as in women.

Anthony Sossong, MD, Harvard Pilgrim’s associate medical director for behavioral health care, believes that e-health offerings can help men take that first step toward accessing care and also provide anonymity if stigma is an issue. “These tools aren’t inherently more useful for men versus women, but they do provide additional access points for care,” Sossong says. “And that can be especially helpful for men to overcome their reluctance to seek out care in traditional ways. The more ways of accessing care we can provide, the more likely we are to reach this population.”

Now, during the pandemic, virtual therapy has for the most part replaced in-person sessions and many insurers are now reimbursing e-visits at comparable rates. Harvard Pilgrim Health Care, however, committed to parity a decade ago and its online therapy sessions are just one example of how the health plan supports digital behavioral health. Digital health tools can put men in the “driver’s seat” of their own care.

Sanvello, a very popular mental health mobile app, is one of their offerings. The app borrows heavily from cognitive behavioral therapy, an evidence-based modality that helps change negative patterns of thinking. Users can track their mood, sleep, and exercise; learn skills to manage their emotions; participate in anonymous chat groups; and connect with coaches and therapists through live video sessions. “An app like Sanvello targets people who may have some depression and anxiety, but perhaps are reluctant to seek formal treatment,” says Sossong. It can also keep their symptoms from exacerbating to the point where they need a more intensive intervention, he adds. Along with Sanvello, Sossong says people have also responded very positively to the app Talkspace, which allows users to text with therapists.

But when it comes to seeking out therapy or medical mental health support online, finding a trusted platform is important—not just for the efficacy of care, but for patient safety and privacy, too. Psychiatrist Ipsit Vahia, MD, the medical director of McLean Hospital’s Institute for Technology in Psychiatry, recommends that app users make sure they understand what happens to the personal data they’re inputting. “Who does it belong to? You? The app developer? The cloud service where the data is stored?” asks Dr. Vahia. “Many of the answers are in the terms of agreement, but almost no one reads the fine print.”

The American Psychiatric Association offers guidance to professionals, which can be useful to consumers too, on how to assess the efficacy and risks of mental health apps. Insurance providers like Harvard Pilgrim also support valuable virtual therapy tools, and mental health advocacy groups may partner with online platforms to reach patients in need.

Once a user finds an appropriate app, it can help put them in the driver’s seat managing their own care. “We know that patients have better outcomes when they’re really engaged in their treatment and these tools can motivate them to be more involved,” Sossong says. For men, digital tools can be on-ramps and add-ons to more traditional forms of mental health treatment, but there is no substitute for that powerful alliance between therapist and client, he stresses. “It’s all about that ongoing therapeutic relationship.” Digital health tools can help men receive treatment sooner, empowering them to take the first step to address their mental health needs and reducing the incidence of more serious issues. Plus, with COVID-19 concerns keeping some people from their doctor’s office, online mental health services offer a safe alternative to in-person care—and some men find that digital tools have a lower barrier to entry than traditional therapy visits. “Men are less likely to seek out treatment for these conditions, so having these digital tools, which in some cases encourage engagement with treatment, is more important than ever,” says Sossong.

For Joe R., it was one testimonial, from a man who reminded him of himself, that finally cut through his fog. “I sensed a faint glimmer of light in the darkness,” he recalls. Although the 64-year-old Michigan retiree still has his rough days, he now has a self-care routine, including medication, that keeps his depression under control. “It saved my life that night,” he says.

If you are affected by the issues raised in this article, help can be found at the Substance Abuse and Mental Health Services Administration.

If you or someone you know is considering suicide, please contact the National Suicide Prevention Lifeline at 1-800-273-TALK. 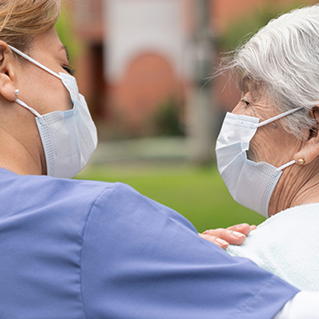