Check ‘iceberg spotting’ off your bucket list this summer along Newfoundland and Labrador's Iceberg Alley. In 2017, a towering iceberg captured international attention when it parked beside the tiny Newfoundland and Labrador town of Ferryland, an hour south of the capital city of St. John’s. Traffic on the normally quiet highway slowed to a virtual standstill as locals and visitors alike drove out to capture pictures of the giant berg, which at more than 150-feet tall dwarfed every building in town. Though that legendary iceberg (now immortalized on a Canadian stamp) has since floated on, each year glacial wonders of all shapes, sizes, and shades of blue make their way down Canada’s Atlantic coast.

Like songbirds and flowers, icebergs are one of the first signs of spring if you live in Newfoundland and Labrador. As a young girl, Amy Fisher, digital lead at Newfoundland and Labrador Tourism, and her family would hop in the car and drive up to Signal Hill in St. John’s, or out to Cape Spear, less than a 20-minute drive away, to look for icebergs grounded in shallow waters. “No matter how long you live in this province, iceberg watching is something you never grow tired of,” Fisher says. “These massive towers of ice are an awe-inspiring sight. They are our version of skyscrapers.”

The beauty of a berg An iceberg is created when the edge of a glacier breaks off into the ocean, giving each one unique physical characteristics. About 90 percent of the icebergs seen off the coast of Newfoundland and Labrador originate in western Greenland, where glacier ice is up to 10,000 years old, and travel hundreds of miles to reach Canada.

“Icebergs are beautiful but can be extremely dangerous if you get too close,” says Barry Rogers, a seventh-generation mariner who owns and operates Iceberg Quest Ocean Tours in St. John’s and Twillingate. “Only about ten percent of an iceberg is visible above water, so you have to give it a wide berth and admire these glacial giants from a safe distance.”

Rogers has been around icebergs all his life, but seeing one calve or completely break apart is always a thrill. “Everything can change in a New York minute,” he says. “There’s a crack, like the sound of a cannon firing, and then it sounds like rolling thunder as the ice falls hundreds of feet to the water below. When the ice hits the water, it sounds like the hissing of a thousand cats.”

Sometimes an iceberg can flip or roll, making it look completely different than it did moments before. When a massive iceberg rolls or calves, it creates a tsunami-style wave—another reason tour boats keep a safe distance. Iceberg viewing is such a popular pastime that Newfoundland and Labrador Tourism has developed an award-winning iceberg finder website to help people locate the best spots for taking them in, in all their glory. “More than 500 icebergs drifted past our shores last year, but since their movement is controlled by winds and tides it is difficult to predict exactly where to see them,” Fisher says. “Our one-of-a-kind website uses satellite tracking data as well as on the ground reporting from locals and visitors to accurately track icebergs.”

Crowdsourcing is what makes the website particularly useful and unique. Users can upload their own photos of icebergs, and add them to the map, along with information about where and how best to catch sight of them. The website also connects users with tour operators that can get them closer to icebergs for the ultimate experience. The area from the coast of Labrador to the southeast coast of Newfoundland is home to some of the world’s best locations for iceberg viewing. Prevailing winds and currents in the North Atlantic carry these humongous arctic sculptures past this region with such frequency that the area has been dubbed Iceberg Alley. Peak iceberg viewing season runs from late May to early June along the coast of Newfoundland, and from March to July along the coast of Labrador, but icebergs have been spotted there as late as September.

“It’s the accessibility to these natural wonders that makes Newfoundland and Labrador special,” says Gillian Marx, media relations coordinator at Newfoundland and Labrador Tourism. “You can drive along and spot icebergs from your car window or hike a trail and get a close-up view. It’s a once-in-a-lifetime experience that’s right on our doorstep.”

Since icebergs are constantly in motion, Marx recommends that visitors check the IcebergFinder website first and plan their driving route accordingly. “The Twillingate area of central Newfoundland is right in the heart of Iceberg Alley and it’s a good place to begin,” Marx says. “Twillingate has been called the iceberg capital of the province. The area is full of little islands and channels and that makes it easier to see icebergs.” You can even catch a ferry from Twillingate to Fogo Island or Change Islands for an idyllic day trip.

When it comes to “ooh-ing” and “ahh-ing” over icebergs, the higher you go the more awe-struck you’ll be. The Twillingate Lighthouse provides an ideal vantage point to spot them off the shore. Near St. John’s, Signal Hill and Cape Spear Lighthouse offer incredible views of the bergs from land early in the season, or head to St. Anthony, on the northern tip of the island of Newfoundland and check out Iceberg Alley, Santana, or Dare Devil trails. In Labrador, Point Amour Lighthouse, the tallest lighthouse in Atlantic Canada, is the best place to gaze upon icebergs and maybe also catch sight of whales in the Labrador Straits.

The path of the icebergs varies each year, so the most magnificent spots to catch a glimpse of them do too. Keep your plans relatively flexible and trust local experts to successfully chase the bergs wherever they flow. “If they’re visible from land, we can reach them in the tour boat and viewing an iceberg up close is an experience of a lifetime,” Rogers says. “I enjoy seeing people’s reaction when they see an iceberg for the first time. They’re awestruck.” Even if you don’t see an iceberg during your visit to Newfoundland and Labrador, you can definitely taste one! Some of the icebergs that float along the coast end up in cocktails served at local bars, where iceberg ice is broken into small pieces and used to chill drinks. Besides upping the coolness quotient of a cocktail, some locals believe drinks taste better with a little prehistoric ice in them.

The other way to taste an iceberg is to drink iceberg water, iceberg beer, or iceberg spirits—all of which are prepared and bottled locally in Newfoundland. “It’s the world’s purest water source,” notes Alan Collingwood, vice president of Collingwood Spirits and Wines. “Iceberg bits are harvested off the coast of Newfoundland and the melted water is used to make Iceberg vodka and other spirits as well as cosmetics and soaps. Iceberg vodka is so incredibly smooth, it makes a perfectly balanced cocktail.”

Whether being in the presence of a colossal iceberg has been your lifelong dream or is a recent addition to your bucket list (or even an addition since you started reading this article), check out the location-based suggestions below, to map out your adventure.

Icebergs are constantly in motion and can be seen at any point along Iceberg Alley. Be sure to check IcebergFinder before you set out and adjust your road trip accordingly. If you’re driving, remember to watch for moose! 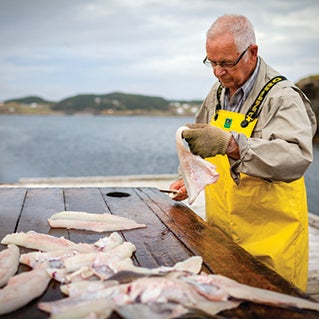 10 palate-pleasing ways to take in St.John’s this summer

From wild game to bacalao, unique treats abound in Newfoundland and Labrador's capital.