In running her family's restaurant, Jennifer Nguyen is defining success on her terms.

Jennifer Nguyen took over Bánh Mì Ba Lẹ, her family’s Dorchester restaurant, from her sister in 2000. At that time, Nguyen had been living in the U.S. for almost 20 years. She was divorced with four kids, aged 11 to 14, each a year apart, and she rarely had enough money. Nguyen remembered once going to the market for a bottle of soda and a bag of chips. When her second son asked for a banana, too, she couldn’t buy it for him. “I see the other children, they can go with [their] parents. They go [on] vacation. They can have beautiful glow,” Jennifer says. She wanted that for her kids. So, in the restaurant, she worked constantly. When she first got the store, there was just a shopfront and a basement. The building was very old. The floors were flooded. Everything needed repairs. Every night, she picked up trash — and every day she could fill up ten or fifteen bags. “I work like I don’t feel tired at all,” she says.

During that time, she thought often of a lesson she learned from her father. He was a farmer and a soldier, a quiet man whom all her kids loved. He would tell Nguyen to pick up a chopstick and show her how easily he could break it. But then he’d add another chopstick and then another. The bundle became harder and harder to break. “If you put five or six sticks, you cannot break them,” he’d say. That meant she was stronger together with other people — her family, and her community. “I think my father is right — family, community, that’s something you need to build your future,” Nguyen says.

She started to serve Ba Lẹ’s signature Vietnamese bánh mì sandwiches, inspired by street food she grew up eating. Nguyen began with simple pork sandwiches, layered with pickled vegetables and cilantro, fish sauce, and scallion oil. The store was open early mornings, which meant people in the neighborhood could stop by before work, grab a sandwich — which cost just two dollars back then — and go. The coffee was like what her mother used to serve, “not too dark, not too light,” from the restaurant her family ran in Vietnam. Nguyen’s food has made a mark on the neighborhood — and across Boston. She even counts former mayor Marty Walsh as a regular. “People keep coming back because the flavor, the ingredients I put in, I learnt back home,” she says.

“I think my father is right — family, community, that’s something you need to build your future.”

Ba Lẹ took off, and Nguyen wanted to keep expanding the business. She realized that a warehouse for dry goods would help with the restaurant and found an ideal location. But she knew that having good ideas in business was nothing without financial support. “If Santander Bank don’t give me a loan, then I don’t have a chance,” Nguyen says. With Santander, she was able to acquire the financing she needed. Eventually, the bank would help her get the loans to buy the building where Ba Lẹ resides, too. When her children were ready to buy houses of their own, she sent them to Santander. “Now Santander Bank and me [is], like a relationship,” Nguyen says, “very, very close.” Her business has grown, and so has the community around it — one with her customers and one with her staff, which includes one of her daughters and grandkids. When an employee needs help, Nguyen is there for them. In the summers, when she closed the store, she and her staff would go outside and eat together in the sun. “We are very close. You see all that. When you’re here, you can see it,” she says. “They work very hard, but they are laughing.”

When Nguyen moved to Boston in 1982, she was just 20 years old. Her family had suffered hardship during the civil war in Vietnam. She was one of nine siblings, and one of her brothers had died in their mother’s arms when the family couldn’t afford medicine. That was when her family realized they had to leave.

“We left the country with nothing and now we can do something in the new country.” Nguyen remembered how when they first moved to the U.S., everything was new to her. “The language, the house, the culture, the street, everything looked new. Very different.” Slowly, the community in Dorchester helped her family settle in their new home. Today, she sees other immigrants from Vietnam starting businesses in the neighborhood. “I’m proud of them because [we’re] Vietnamese, we are the same. We left the country with nothing and now we can do something in the new country.”

To Nguyen, success ultimately means more than growing Ba Lẹ. It means having time of her own. “I tell my daughter when I have time for myself, I have time for my grandkids,” she says. “I can stay home, play with my grandkids, I can do my garden, I can wake up and get a cup of coffee, or the community needs something — I  go there to do volunteer. That’s a success.” Every day, Nguyen is working towards that. And in the meantime, her children are fully grown. They own their own houses, they have jobs, and are raising children of their own. “They can build the future,” Nguyen says. And when they do, they think of her — the strength and hard work she put in to get them where they are today.

Readers should consult their own attorneys or other tax or financial advisors regarding any strategies mentioned in this article. These materials are for promotional purposes only and do not necessarily reflect the views or endorsement of Santander Bank. 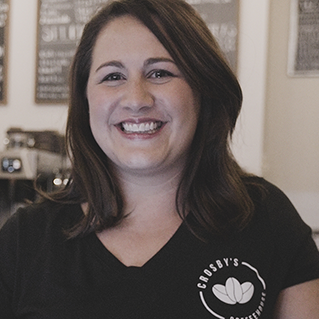 Crosby’s Coffeehouse, a space where women can “root for one another”

Owner Meg Peters created a welcoming coffeehouse where a supportive community can grow.