This woman dedicates her life to supporting her community, celebrating Black culture, and advocating for change

A Lynn, Mass. librarian, veteran, and activist is improving her community by helping those in need and improving race relations—in the North Shore, and beyond.

Nicole Mcclain founded the North Shore Juneteenth Association (NSJA) in 2016 to shine a light on Black Americans’ contributions and celebrate Black culture in her hometown of Lynn, Mass. She was also inspired to found NSJA to keep her family safe. In 2015, Mcclain’s then 15-year-old son, Jaeqhan, was hazed by the police for no reason but the color of his skin, she explains.

“That made me want to educate our community on Black American culture and show that we are worthy of respect and dignity,” she says. “I feel like it’s assumed that Black people are deserving of punishment and mistreatment. We shouldn’t be abused or made to feel that we can’t just live our lives.” NSJA has evolved to host multiple events, including a Black Excellence 5K, a “Hats and Heels” High Tea, and a family-friendly paint night in which children and their parents learn about Black American artists. The organization’s work is also expanding into other communities. When COVID-19 forced NSJA to cancel its in-person  Juneteenth celebration, it partnered with West Medford to host a virtual event. It ran a Juneteenth flag raising for Salem, Mass., and it is in talks with the town of Lowell to plan a flag raising for 2021.

Mcclain, a children’s librarian at Lynn Public Library, is excited to be spreading the word to other North Shore Communities.

In addition to shining a light on Black culture, the organization also supports community members in need. In March, Mcclain learned some families were “shut in by COVID” and not leaving the house for groceries. NSJA partnered with the North Shore Labor Council (NSLC) to find a solution. Mcclain says it took quite a few calls before they found a store or service willing to deliver—My Brother’s Table, a soup kitchen in Lynn. NJSA and NSLC used funds from their organization to buy the first batch of groceries to feed 10 families. Within two months, they had 300 families on their list.

NSJA volunteers are no longer involved in the program, but NSLC continues to feed people in need.

“There must be around 500 families being fed through the program that we created,” Mcclain notes. “That is awesome.” Mcclain has a long history of service. She is a National Army National Guard veteran who deployed to Iraq and Baghdad. In addition to her work with NSJA and the library, Mcclain and her husband, James, own Shop SYN (which stands for “support your neighborhood”), a brand that sells local vendors’ products. The Mcclains use a portion of the small business’s profits to fund community outreach programs, including arranging for a Black Santa to pass out gifts to local shelters and hosting fashion show fundraisers and collaborating with community members to host a father daughter gala. They also partnered with community leaders to give away 500 backpacks with school supplies to students in need. Although they had to close the storefront due to COVID-19, they are still selling online.

An opportunity for real change

2020 is the year of COVID-19. It is also the year of Black Lives Matter (BLM). Mcclain has been active in the movement, peacefully lobbying for change. Recently, NSJA joined politicians, community organizations, and local police to discuss ideas for police reform, including having officers wear body cameras and implementing a review board. Mcclain is proud of her community for having these discussions but notes talking is just the first step. She believes society has “a huge opportunity to create real change” by continuing the momentum of the BLM movement.

“As long as people keep pushing and organizations keep working hard, there will be a difference. We just can’t let up.”

Her career, her store, NSJA, her activism—it is a lot to juggle. But Mcclain’s family and sense of purpose keep her motivated. She wants to make the world a better place. She also wants to protect her son.

“My son, obviously, is a huge part of me trying to improve my city. This is where we live, and I just want us to feel protected and safe. That’s what really motivates me more than anything else,” she says. “Hopefully I can help to improve the way Black Americans are treated in my city. Then we can try to expand from there.” 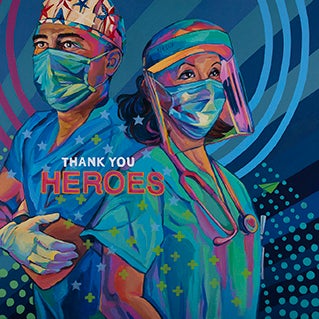