Adventurous families and friends looking to bypass the Cape (and escape their fellow Bostonians) this summer are in for a treat. There’s a small town in northeastern Vermont just daring you to deviate from the norm.

East Burke, Vt., is a haven for thrill seekers and mountain bikers. Adrenaline junkies come from all over to swoop around the machine-built berms and launch themselves off of the jumps at Burke Mountain Bike Park. But here’s a little secret: You don’t have to be a hotshot biker to enjoy riding at Burke. There’s something for all ages—and all you need is a sense of adventure to make it a vacation to remember.

Get to know the lay of the land

Bike trails crosshatch both sides of East Burke, but are concentrated in two main areas. West of Darling Hill Road, Kingdom Trails singletrack dominates, with a mix of fast, swoopy trails and some flatter, more mellow options for less experienced riders. East of Darling Hill, the gravity-fed Burke Mountain Bike Park—built right into the side of Burke Mountain ski resort—offers 17 lift-served trails and three fast and fierce downhill trails from the summit. If you take advantage of the Bike and Stay package right at Burke Hotel, you’re in prime position for a bike-in/bike-out vacation that starts on the trail and ends with a dunk in the hotel pool or a soak in the hot tub.

Invite another like-minded family for twice the fun

Take it from frequent Burke-vacationer John Mosher: Burke is even more fun when you team up. Mosher, his wife Michele, and their daughter, Ryley, from Boxborough, Mass., have been vacationing at Burke with their friends, the Gunsaluses, for years.

“It’s fun to do a dual-family vacation in Burke because it’s so condensed,” Mosher says. “It’s easy to get together and do things, then go back to your own family units at night.” For 16-year-olds Ryley and Lizzy Gunsalus, both nationally ranked cyclists in the sport of cyclocross, joint family vacations also meant freedom to roam at an earlier age. “By the time they were 10 or 11, we’d let them go out solo for an hour or two,” Mosher says. “They figured out how to get around really quickly.”

The same was true for Austin and Carson Beard, 15-year-old brothers from Middlesex, Vt. “They’d go do extra loops at Kingdom Trails with the other kids when the adults were done for the day,” says Kelly Ault, who, along with her husband, Phil Beard, frequently rides at Burke. “The signage is great, the maps are great, there’s plenty of cell service. We’ve never felt too worried about letting the kids explore a little on their own.”

Fun for the littles: balance bikes and stroller access

You don’t have to be a hard-charging teenager to enjoy the trails around Burke. Balance bikes—miniature-sized two-wheelers without pedals—can be used by kids as young as two years old. Christsonthy Drellos, an employee at the Village Sport Shop Trailside, frequently sees pint-sized shredders tackling the pump track below the shop on Darling Hill. (There are also three more pump tracks in the village behind East Burke Sports.) And, says Mosher, that area of Darling Hill is a great place in general for less-experienced riders. As a bonus, the bike shop also serves craft beers, wine, espresso, and snacks, which can be enjoyed from an Adirondack chair overlooking the track.

If your kids are too little for two-wheeled fun, load up the car and drive up the CCC toll road for a picnic at the pavilion with Willoughby Gap as the backdrop. Older kids can scramble up the fire tower for 360-degree views, and there’s a newly rebuilt universal-access trail that’s stroller-friendly. You can also take a scenic chairlift to the top for five dollars for gorgeous views with no effort required. When Mosher’s daughter was younger, she’d often lobby for a visit to the Mountain View Animal Sanctuary on Darling Hill Road or a horseback trail ride to augment the fun on bikes. RubyLee’s Ice Cream in East Burke is another popular place for families to regroup.

“The way the trail networks extend from the village provides great diversity for riders of different levels,” Ault says. “When the boys were young, we’d ride trails first, then go swim in the river or eat creemees (soft-serve) to keep it fun for them.”

Which brings up an important point: If you want to ride with your kids all day, be sure to bring enough food. The Snack Shack pop-up food truck has saved many a rider from hunger with its locally sourced wraps and sandwiches (check the hours), but it’s always a good idea to fill everyone’s pockets with energy bars and snacks.

Not every kid wants to spend vacation with their parents though. Kids ages 6-17 can escape their families to ride with their peers in a series of mountain bike adventure camps run by Northwoods Stewardship Center. Most camps include a mix of biking, swimming, hiking, or climbing—and all skill levels are welcome, says Maria Young, director of education at Northwoods. Camps flow between Kingdom Trails and the Burke Bike Park, but drop-off and pick-up is at Sherburne Base Lodge near the hotel, making it easy for parents. Plus, a bag lunch is included.

One of the coolest camps also comes with its own souvenir: a pro-grade mountain-biking video that kids make during camp. SOCAPA (School of Creative and Performing Arts) is a mountain biking/action filmmaking camp run by Burke native Jamie Yerkes, who worked for 12 years as a filmmaker in New York City before returning to his hometown. The riding is led by professional mountain bike racers Alex McAndrew and Ella Skalwold, who also lead custom tours with renowned trail builder Knight Ide via Vermont Mountain Bike Tours. “Kids rave about that camp,” Drellos says.

And if your teenagers are skilled enough to shred solo, let them. “We’re known for our riding scene here, and that’s what the younger crowd does: They ride,” says Drellos.

(And yes—you can rent them a full-face helmet and body armor right at the park.)

Don’t forget it’s your vacation, too

If your kids are in camp or off riding with their peers, it’s time to dial in your own ride. Think you’re good enough to join the teenagers at the bike park, but not quite sure? Here’s a tip from Jessica Sechler, sales and marketing director at Burke: “Go ride the flow trail Kitchel, over at Kingdom Trails. If you think that’s fun, then get over here to the park, because you’ll love it,” she says. And if you’re not quite there yet, consider taking a group or private lesson to dial in your skills first.

Or, just take the easy way down. Of the trails accessed via the Sherburne Express chairlift, Roly Grail is the mellowest, with Jester a close second. If you’ve already mastered those, catch the Burke Bike Park Summit Shuttle ($10 for a single trip, plus the cost of a day pass or season pass) to the very top and try your luck on the experts-only summit trails: Free Ride, Upper J-Bar, and Rude Awakening.

“The ability to ride cross-country and downhill trails in the same area is unique,” says pro enduro and cross-country racer Kim Quinlan. “It’s cool to be able to hook up miles of single track at KT, but also play on more technical trails and beautifully made machine-built jumps at Burke Mountain resort.” East Burke is best explored via bike. But you don’t have to be a biker to enjoy a week in Vermont’s Northeast Kingdom area—and mixing up activities ensures that mountain biking doesn’t get old. The Mosher family loves to ride together, but it’s not a visit to Burke if they don’t go swimming in the Passumpsic River right in East Burke, swimming, kayaking, and cliff-jumping off the ledges at nearby Lake Willoughby. “It’s just the perfect blend of having enough amenities to enjoy as a family—and the recreation is everything,” Mosher says. You can bring your own gear or rent stand-up paddleboards, kayaks, or double-kayaks from Village Sport Shop. And if you’re feeling ambitious, take a hike up Mount Hor before a dip in Willoughby or tap into the hiking options at Burke Mountain. (The Red Trail is a great option).

No matter how you spend your day, try to sneak in a visit to Mike’s Tiki Bar in the village. You can grab some quick eats at the mobile food truck out front or have a craft brew poured from one of the 30 beers on tap.

“If you do that, you’ll look around and see about half the people you met on the trail that day,” Ault says. “It’s all mud-speckled legs, big smiles, and lots of story-swapping about the day of riding.” 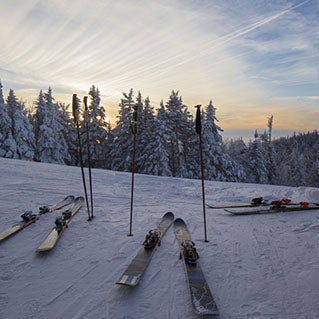