At 59 years old, Tom Tucker started getting bloody noses several times a week and noticed a tingling in his fingers. But, otherwise feeling healthy, Tom didn’t think much of it. That’s why it came as a shock when a doctor informed him he had multiple myeloma, a cancer of the plasma cells.

Today, 15 years later, Tom considers himself lucky to be alive. Despite the cancer and side effects from treatments impacting his ability to scuba dive and leading to an early retirement from his career as a supervisory physicist and project manager at a Navy lab, Tom has a new perspective on life and focuses on what he can do, as opposed to what he can’t.

Tom is passionate about swimming, gardening, and is an active member of his church. He understands more than ever the importance of family and cherishes every moment with his wife, Helen, and their children and grandchildren. One of their sons and two grandchildren live just four doors down the street. This year, Tom and Helen, a retired nurse, celebrated their Golden Anniversary after meeting at the Pearl Harbor Officers’ Club in 1971 and getting married shortly afterwards. Tom also volunteers with the Leukemia & Lymphoma Society First Connection Program and co-leads the San Diego Multiple Myeloma Support Group, finding speakers to share the latest information on multiple myeloma and reaching out to the newly diagnosed to offer support and guidance. “When I introduce myself as a 15-year survivor, for a lot of people that’s incredible news,” he says. “That’s hope.”

So, what’s Tom’s number one piece of advice to others going through the same thing? “You need to get up and get going,” he says, “as both a partner for your health care team by telling them what’s going on, and for your own sake by staying physically active to the extent you can.”

Tom is hopeful that more treatment options are on the horizon for people living with multiple myeloma so that living with the disease for 15 years or more becomes commonplace. The current 5-year survival rate is about 54%, according to the American Cancer Society. “It’s increasingly [becoming more of] a chronic disease with progress and treatments,” Tom says. “But not everybody makes it. That’s something I’m continually conscious of.” Tom and Helen with two of their grandchildren and family dog

Until recently, treatments for multiple myeloma were limited to those typical of most cancers: chemotherapy, small molecule drugs, and radiation. While effective, these treatments attack more than just the cancer cells, which can be difficult for patients to tolerate and cause serious side effects, like hair loss and gastrointestinal issues. “Today, the medical industry is moving towards precision medicine, targeting something that’s unique about the cancer cell to try to leave the healthy tissue intact and give the patient a higher quality of life,” says Dr. Michael Eisenbraun, director of immunology, cancer vaccines, and immunotherapeutics at Pfizer.

Michael and his team are developing a “tumor-recognizing immune enhancer.” If successful, this immune enhancer would be given to myeloma patients, where it would harness the power of their immune system, especially T-cells, to kill myeloma cells. This approach, if completely developed and approved, may provide a new treatment option for patients with multiple myeloma.

In the clinic, while still early in testing, this immune enhancer is showing a strong response with an encouraging safety profile and minimal side effects, Michael says. “We’re moving into a whole new period of possibilities for patients.” Though trials are still in progress, Michael and his team are hopeful this new treatment, if approved, will provide an opportunity to improve and extend the lives of people living with multiple myeloma. Michael in the lab

At the end of last year, Tom and Michael met for the first time on Pfizer’s La Jolla, CA campus on a sunny afternoon. Sitting in Pfizer’s courtyard, Tom reads the letter he’s prepared for Michael, sharing his story and hopes for the future. These hopes include his own future and the future of other multiple myeloma patients, patients who might not make it to the 15-year mark with treatments currently available.

Tom ends the letter by saying “So, I am asking the impossible of you: help develop efficacious treatments that will continue to increase the survival of myeloma patients and have few or no side effects.” Tom and Michael met for the first time on Pfizer’s La Jolla, CA campus on a sunny December afternoon

Michael explains how the tumor-recognizing immune enhancer treatment he and his team are testing works. He shares that, though certainly challenging to create, a treatment that is more efficacious while limiting side effects is exactly what they’re aiming for with this immunotherapy.

“We’re certainly not standing still. We appreciate [that] we need to do more,” Michael says. “We hear the patients.” 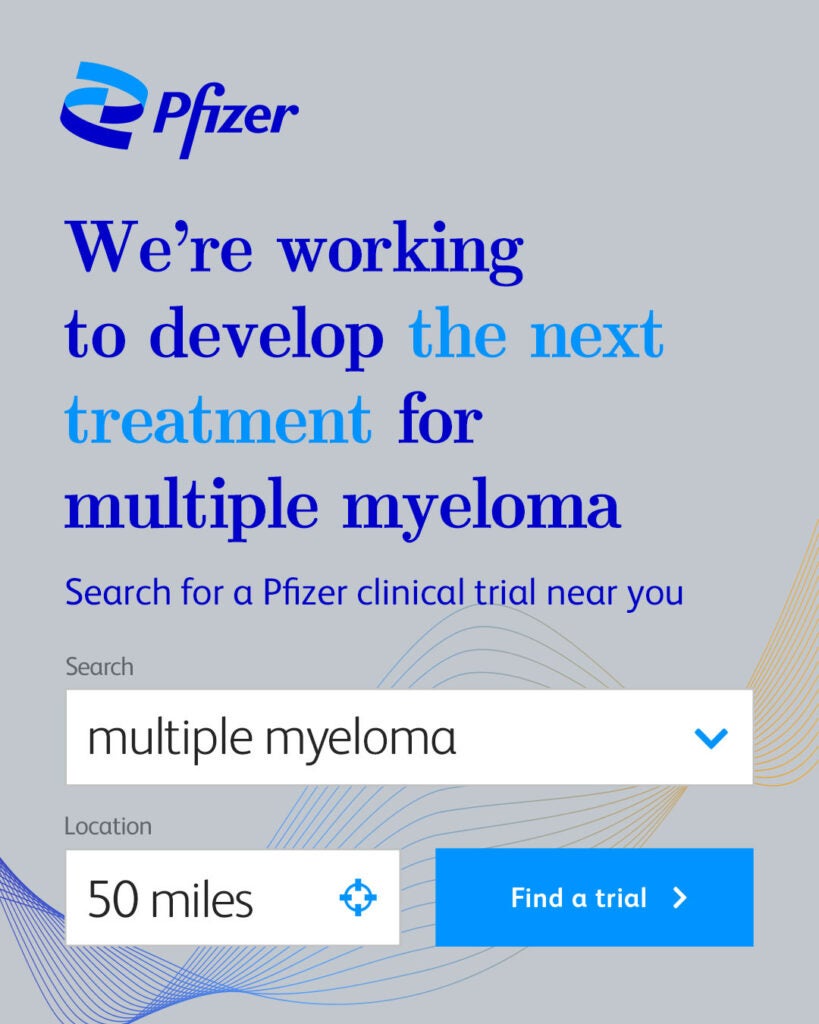